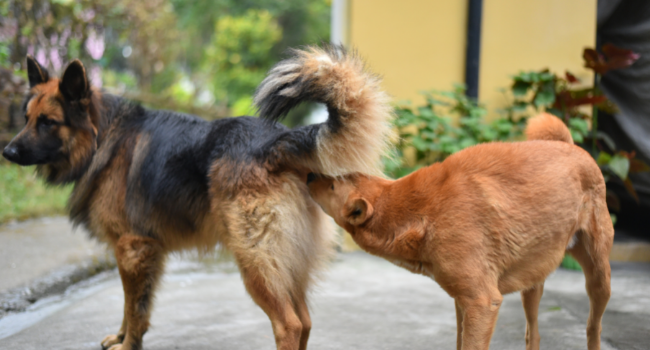 Heat is a period where a female animal is receptive to mating. It is first seen in dogs between the ages of 6 to 18 months depending on the breed of the dog. Small breed dogs can have their first heat as early as 5-6 months while larger breeds can take up to 18 months before they come on heat.

The heat period in dogs lasts for 2-4 weeks. At the early stage, female dogs will show signs of heat but won’t be receptive to the male. The fertile period where they allow males usually occur around day 9 or 10 from the first day the signs were observed and it only lasts for 5 days. To increase the chances of conception and accuracy, it is advisable to run cytology on your bitch to know the exact fertile days.

Common signs your dog is in heat include:

Some dogs do have silent heat. If you don’t observe closely, you won’t know she is on heat and may not see any discharge. Such dogs will compulsorily need a cytology test with progesterone assay to know their fertile days if they are intended for breeding. If you do not have any intention of breeding your bitch, it is advisable to spay her to prevent uterine infection later in life.