Purebred dogs are sold for a range of prices depending on how well they meet the breed standard. The cost buying a dog in Nigeria is also dependent on other factors such as location and importation cost. This post focuses on dogs that are bred in Nigeria.

The Tibetan Mastiff is arguably the most expensive dog in the world! which is probably why they are so rare in Nigeria although a few ‘brave’ breeders breed them. Puppy Price: 750k – 1.5 million Naira.

This breed is a personal favorite of mine because they are simply beautiful and easy to groom. Acceptable colors under the breed standard are the various shades of brindle, fawn, tan or white with brindle patches (pieds). The most common colors are brindle, then fawn, with pieds being less common than the other colors. Puppy price: 300k – 550k Naira. 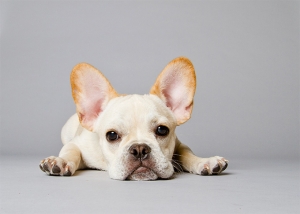 Sometimes referred to as the British Bulldog or simply Bulldog, the breed is the official mascot of the United States Marine Corps. Bulldogs were the fourth most popular pure breed dogs in the United States in 2015 according to the American Kennel Club, they are not very common in Nigeria. Puppy price: 300k – 450k Naira. 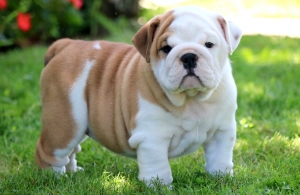 We have had a Neopo before but unfortunately lost her at about 5 months old. The breed’s ancestry is thought to date as far back as  3000 BCE, the beginning of the Bronze Age. Although Neopolitan Mastiffs are massive in size and look imposing the breed have low energy levels and can be gentle and calm. Puppy price : 200k – 350k Naira.

Also known as the Italian Mastiff, this dog breed was developed to guard property and hunt game. The Cane Corso is closely related to the Neapolitan Mastiff. As puppies, they require strong leadership and consistent training and it is encouraged to begin socialization as soon as possible.Puppy price : 200k – 350k Naira.

Bullmastiffs can be easily mistaken for Boerboels because they share some similarities in size and structure. The breed was recognized as a purebred dog by The Kennel Club in 1924. They are quiet dogs and very rarely bark. Puppy price : 200k – 300k Naira. 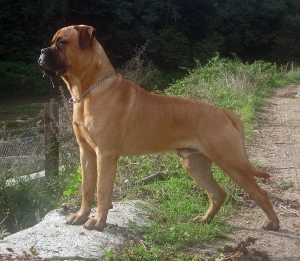 This breed officially called Kavkazskaya Ovtcharka or Caucasian Ovcharka only recently became popular in Nigeria. They are territorial and suspicious of strangers and will protect their flock, family, and property from danger. This breed is not suitable for first-time owners, they are for experienced dog owners who can dedicate a lot of time to train and socialize them. Puppy price : 200k – 280k Naira.

Rottweilers are also very common in Nigeria, the breed is regarded as a medium to large dog. The Rottweiler is one of the oldest of herding breeds, with a history possibly dating back to the Roman Empire. In 1931 the Rottweiler was officially recognized by the American Kennel Club. Here in Nigeria, the breed started gaining popularity in the 1980’s. Puppy price : 150k – 250k Naira.

Probably the world’s most numerous breed of dog, today’s German Shepherds descend from a small population of working shepherd dogs from Northwest Germany. Growing up in Nigeria almost everyone I knew had an ‘Alsatian’, the breed has been around here since colonial times. They are very intelligent, a trait that makes them desirable as police, guard, search and rescue dogs. Puppy price : 150k – 250k Naira.

Although they are steadily becoming popular in Nigeria, a lot of people are still unaware of their presence. The fascinating thing about them is their thick mane and their purple/blue-black tongue. The Chow Chow is a dog breed originally from northern China, where it is referred to as Songshi Quan which means “puffy-lion dog”. Puppy price : 150k – 200k Naira. 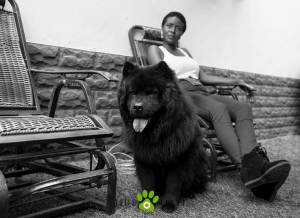 Finding a full breed dog in Nigeria is sometimes difficult, always demand to see the papers and meet the owners and parents of any puppy you want to adopt. If you think I left out a certain breed from the list, please indicate in the comment section.

I believe you don’t own any, if you do, you should know the difference, bingo won’t understand “sit” no matter how hard you train them

This dog proved that all dogs are the same but Africanis are just unfortunate.

Yes the price is too high

You forgot to include Pitbull

Thanks, although Chow Chows are more expensive than Pitbulls…

Like this site it gives pole idea on how to get a good and what breed to get. Thanks

Thank you, we appreciate your feedback.

Nice article! Maybe you should run a series where you can provide more details about each breed and maybe provide info on where one can get them, info about kennel clubs for the breed and other vital info. Business idea, right? Let those who have those

Hello Tony, thanks for the awesome comment. Your suggestions and requests are quite interesting, subscribe to the newsletter to be informed when such an article is published.

Woof line…..
I am not happy you left out saint benard….
A very rare breed…. Its also expensive…..

I am new in the business , I have always love dogs but my religion keeps away from it.

You forgot our indigenous African Shepard, strong and immune to many diseases.

Pls who sells all dogs for sale

Are you sure these are all

These dog prices are so expensive. I could get a rotti for less amount in other places 😏

I have German Shepard

We are unsure if there are any rules regarding specific dog breeds in Nigeria. If you are looking to get a Wolf Dog, you might have more luck sourcing abroad.